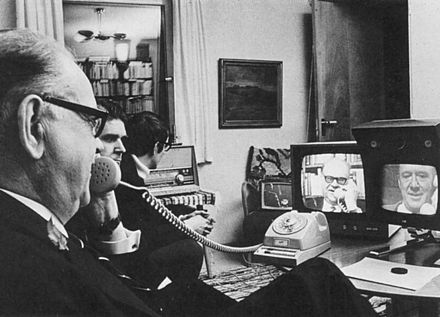 Fifty one years ago the movie 2001: A Space Odyssey brought us the picturephone. Never mind that it had been forecast for forever. But we still don’t have one half a century after science fiction said we would have it nineteen years ago.

Yes, there’s Skype and the others, but we don’t have picturephones, and it’s stupid. Phones all have cameras, screens, and the internet. I shouldn’t have to subscribe to something, Every phone has an IP address; its internet “phone number”. Why is this even a question? This could be done with open source.

This is especially annoying to me because they could have had this a decade ago, yet they removed half of Springfield rabbit ear users’ TV stations for “5G” which, guess what? Still doesn’t have the picturephone we were promised... uh...

Can anybody tell me what 5G provides that actually makes up for losing half my TV stations?

Now, I have an antenna tower with an old, rusted, unconnected 300 ohm twin lead antenna. I can afford to replace it with a modern 75 ohm antenna to get the stations back, but many others can’t. A renter is stuck with either rabbit ears or the obsolete and stupidly expensive cable, as is someone who owns her house but can’t afford an antenna installation..

Why are MY representatives writing laws that favor phone companies over phone customers, over citizens? Over VOTERS?

You can’t fix this by being partisan. Vote candidate, not party. Don’t be a Democrat or Republican, be an American.